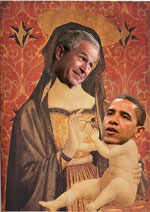 Yeah, yeah, yeah talking about spirits seems sort of lame in this so called modern error, I mean era. Fact being, all dogmas address the supernatural and our direct connection with the spirit world. It’s not a secret homeboy. The spirit world is just next door and there are spirits who are here specifically to rain on your parade. Take it for what its worth but it was said in visions we all chose to walk this world with all the obstacles we face long before we were born unto Earth.

The obstacles placed before us were challenges we, as spirits, needed to overcome before we could continue our journey. Our time on Earth was only one of many stops we were to make on our magnificent journey of great knowledge. There, I said it and soon people will be burning my effigy in Time Square for being a heretic.

By the way I don’t buy into the “my religion is better then yours” ka ka either. In one of many visions I saw all dogmas celebrating together in harmony at this ancient square. Everyone was happy and did not give a flying crappola if someone wore a Burka, Yarmulke or a bonnet filled with eagle feathers. Dogmas celebrated together as one, not this convoluted ‘Holy War/My G*d Rocks Your G*D Sucks’ nonsense that drives war based economies and the New World Order. How far beyond stupid is that?

So just be advised that man has bludgeoned religions to a pulp and retooled their respective dogmas to suite their material/ego needs over the last 500 years or so. He who controls the presses re-writes the history. If it were not for the fact we are living in the time of change I could only imagine the lies government scribes would write about this era of greed and corruption.

As for the metaphysical side to the Earth Changes, you had better figure it out before you find yourself struggling to find your sanity. We must make our connection with the spirit world and know whose who as far as spirits are concerned. We all have dealt with good and bad spirits since the time of birth. Sadly many cultures and religions have moved away from the concept of the spirits and the spirit world. Many people are blind to this very real side to our existence even though their dogmas preach about the good and bad spirits who influence our daily lives.

Now people freak out when some spirit moves a stupid candle around a room or spells “Scream” on spilled beer, gads. How lame is that eh? There are many different types of spirits and by no means am I a pro. I’m just a puppy like the rest of you goons so I’m only sharing what I’ve experienced so far. But you must realize there is a very real spirit war going on right now and the spirit world has begun in earnest to interface with our plain of existence. That’s a part of prophecy as well.

What we must be aware of is the subtle suggestions we mistake for our own judgment or thoughts for those are the voices of spirits. Johnny on the spot, these guys are ready to push the envelope and influence us in some very negative ways. All it takes is just one more word or thought to push someone over the edge and there they go killing their co workers then chopping them up into tiny chunks just because a “voice” told them to do so. Now that is just plain stupid but that is what is happening now. Why else would grown men armed with knives march into daycare centers and hack kids to death? Some bonehead spirit told them to.

If we go ga ga over just the sight of spirits we lost the battle. There are both good and bad spirits but no one seems to be paying attention to that aspect of the supernatural. Like the old adage goes, “Would you let someone convince you to jump off the Empire State Building?” Apparently the answer is yes since people are even tossing their kids out windows these days with the lame excuse, “the voice in my head made me do it”, paleeze.

Along with the physical aspects of earth changes the spirit world has come alive with spirits trying to connect with their ancestors. At the same time there is a host of evil spirits making sure people do not make this vital connection for they don’t want us to survive, plain and simple. The key to surviving the time of change was always a metaphysical one. Shelters, food stores and weapon stockpiles, though handy, are not the keys to survival. It’s your personal connection with your ancestors that would be the key to survival. Knowing which messenger is legit is a survival skill all dogmas preached about.

Knowing who to listen to when danger approaches will save your life. Your dogma has all these tidbits written down as per custom so I’m not going to try and convince you to follow my tradition, just pay attention to yours. The key to surviving the times we live is written in black and white and has been told over many campfires. Guess its more about walking your talk rather than just filling offering trays and singing songs. You must be a spiritual being not just having a Prozac moment.

Being spiritual does not mean you must walk around fearful of everything you do or forcing your ideology onto others. You don’t have to be paranoid and anal about your spirituality either. And please don’t go walking around in some Moon & Star store wearing an Antediluvian robe mumbling scriptures all day long either. Religion was meant to enhance our lives not imprison us in guilt and fear. Spirituality does not require props, self flagellation or the sacrificing your first born child. Being spiritual is being consciously aware of the spirits and spirit-world around you and knowing whom to trust and who you can ignore. Fear should never play into spirituality since you should have absolute faith within the teachings of your respective dogma anyway. Your belief system is your shield of protection from evil and your strength over fear.

Just remember that evil spirits flourish in an atmosphere of fear and once they got your number they will haunt you with your innermost qualms. They love to threaten you and your loved ones when you first stand up against them. They say some powerfully spooky crappola if you give them the chance to say their schpeel. No matter what they say or do, always stand firm and don’t give them any quarter, is my advice to you. Just because they are spirits does not make their words gold.

Hello Mac Fly, we are spirits to. It is imperative you get your spiritual act together before you end up on heavy meds, prison, mental institution or hanging from the rafters. Differentiating between good and evil spirit when a messenger appears (without freaking out) is the key to surviving the tumultuous times that lay ahead, capice?

This site uses Akismet to reduce spam. Learn how your comment data is processed.

Buffalohair Gazette Archives By The Month